Five Other Arizona Bites and Stings to Avoid 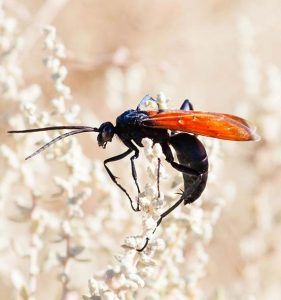 A wasp or bee sting certainly hurts, but they are not the only Arizona bugs with a painful bite or sting. Even if you request professional bee removal services, your home or yard might still house critters that sting or bite. In this blog we’ll discuss five bugs-where you might run into them, and why you should give them plenty of space.

This insect is a type of wasp, but since it varies quite a bit from the typical yellow jacket you’re used to, we included it in on this list. Larger than the typical wasp, the blue-black tarantula hawk might get almost as big as the palm of your hand. You can also recognize them from their distinctive reddish wings.

Tarantula hawks feed on nectar, and they save their stingers for defense and for feeding their young. As you might have guessed from the name, these wasps hunt tarantulas, paralyze them, and then use the paralyzed bodies to feed their young.

While tarantula hawks rarely sting humans, only one type of insect-the bullet ant-is known to produce a more painful sting. The pain from a tarantula hawk sting only lasts a few minutes, but it is excruciating.

That said, you don’t need to be too afraid of these insects unless you’re a tarantula. Just exercise caution, and don’t provoke them into a defensive sting.

With wide pincers, multiple legs, and that unforgettable stinger, scorpions seem more like a mythical monster than a typical backyard bug. The Arizona bark scorpion is smaller than other varieties, rarely reaching a length of more than three inches.

What this scorpion lacks in size, it makes up for in sting. With the most potent venom of any scorpion in North America, the bark scorpion presents a significant threat for pets, young children, and the elderly. If you are stung by one of these critters, you might experience severe pain and possibly temporary dysfunction in the affected limb.

These scorpions, like many desert creatures, hide during the hot days and come out at night. Strangely, these animals prefer hanging upside down, so you can often find them hanging underneath an object instead of resting on top of it. Keep bark scorpions out of your home by sealing your house foundations and keeping your home clear of any other pests.

The infamous brown recluse is native to the Midwest and the South, but a few variants of the species live in Arizona. The desert recluse is still brown in color, but the signature violin mark on its more famous cousin is mostly invisible in this species. Perhaps the most distinguishing feature of recluse spiders are their six eyes, instead of the typical eight.

While the danger of recluse spiders might be exaggerated by some media reports, some bites from this species do cause serious wounds. While a desert recluse bite will rarely be fatal, it might result in a necrotic wound-dying tissues with very slow healing. These spiders usually aren’t aggressive, but if you scare them they might bite.

Unlike the more well-known brown recluse, the desert recluse and other recluse spiders in Arizona don’t rely on man-made structures for survival. Because of this fact, it’s rare to find a serious infestation of recluse spiders in an Arizona home. Instead, the spiders usually end up in the home by mistake (such as by traveling in on some firewood you carried home). Just to be safe, eliminate wood and other debris from your yard.

Ticks are actually arachnids-like scorpions and spiders, they have eight legs. The tiny brown dog tick is found all across America and especially in warmer climates. Ticks live off the blood of their hosts. Unlike fleas, they won’t stick with only one host. Instead, they wait on vegetation for a host to brush against them. After feeding, they will detach and wait until they’re hungry to find a new host.

A tick bite might cause a bit of discomfort and itching, but the true danger of a tick bite is the possibility of disease. Your pet dog can contract several potentially deadly diseases from ticks. Humans might contract Rocky Mountain spotted fever-a life-threatening disease that includes fever, muscle pain, nausea, and a spotted rash.

To prevent tick bites, avoid brushy areas or areas with high grass. Stick to trails when hiking outdoors. Check your body and your clothes after a trip outdoors if you think you might have been at risk. You should check pets as well.

Most ants are simply obnoxious pests, but the fire ant is different-these reddish brown ants pack a potent sting. Fire ants sometimes live in large colonies with hundreds of thousands of worker ants. And unlike other ants, fire ants are highly aggressive when they encounter intruders. Stepping on a fire ant mound will quickly result in a swarm of angry, stinging insects.

Most fire ant stings are simply painful. The stings contain an alkaloid venom that irritates the skin and causes a burning sensation, which is likely how fire ants received their distinctive name. Sometimes a victim of a fire ant sting might experience a more severe reaction, similar to a bee sting. If that’s the case, a medical professional should be contacted immediately.

To avoid fire ants outside of your home, simply watch where you step. If you have an infestation in your house, you’ll need to call a pest removal company for help.

Arizona has more than a few painful insects and arachnids. Keep on the lookout for stinging and biting creatures-both the bugs we’ve covered in this blog post and the various wasp and bee species in Arizona. If you want more information on wasp and bee stings, check out the rest of our blog.