Every spring ASAP Bee Removal gets calls from homeowners concerned that they have a bee hive in a tree.  Most of the time it is not actually a hive, but a honeybee swarm on the move.  A swarm occurs when part of an established colony produces a new queen bee and a portion of its bee population splits,  leaving the nest to establish a new hive. 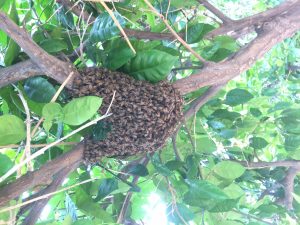 These bees on the move create a swarm which then relocates based on the queen’s instructions. The majority of the swarm finds a safe resting place to surround and protect the queen, while individual scout bees are sent out to find a suitable nesting space.  Still others are gathering water and pollen to prepare for setting up the new hive.

It is swarms at this stage with which we have the most success in live bee removal.  The bees are generally docile,  the queen is safely nestled in the heart of the swarm, and they can be carefully removed into temporary housing such as a box or netted bucket.   They are then transferred to a hive box in a new location, or can be released back into the desert.

If not removed, bee swarms will move into structure. Once a location is found, the bees move in and immediately begin to produce hive and honey. Occasionally they will nest right in the tree, but usually, they prefer a closed space with cover.  We find them in attics, sheds, cabinets, barbecues, and water valve boxes, among others.  New bees will be produced in about 23 days.  This means that only 3-4 weeks after swarming, bees have established a colony with hive, honey and brood, and it becomes very difficult to remove them without harm.  In Arizona, bees in urban structure become aggressive and territorial very quickly and can become dangerous to homeowners and their pets.

If you think you have swarming bees, call ASAP Bee Removal to safely provide honeybee removal and relocation. We network with local beekeepers to protect our honeybee population.