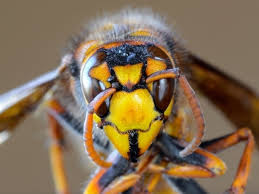 Murder Hornets, or Vespa mandarinia,  seem to be the latest plague upon us. We have been getting lots of inquiries about this new threat, so we did some research on the likelihood of their arrival in Arizona.

Asian Hornets, aka “yak killer” hornets or giant sparrow bees, come from the temperate climates of Eastern Asia.  They are about 2 inches long and have a 3-inch wingspan.  They have large jaws capable of decapitating their prey.  They live in colonies, and queen bees and workers have quarter-inch stingers that cause great pain as they inject their venom.  The venom, though less toxic, is 10 times the dose of an average honeybee.  Allergies to the stings can cause death, although it takes dozens or even hundreds of stings to kill a person.  In Japan, about 50 people per year die from the Asian hornet stings.

These hornets have migrated to the Pacific Northwestern United States.  There have been two confirmed sightings in Washington state and have also been spotted in Canada and the United Kingdom.  These carnivores are known to raid beehives, rip the heads off of bees, then feast on the larva. They then carry the leftovers back to their nests to feed their young.  Hornets can kill 3 or 4 bees per minute, and  can destroy an entire colony in a couple of hours.  The piles of dead bees are what alerted the Washington state Department of Agriculture to this potential threat.  It still remains to be seen if they can actually establish permanent colonies, reproduce and multiply here in the U.S..

Honeybees do have some defense against this predator.  They can effectively “cook” a hornet by forming a ball of hundreds of bees around the enemy.  This vibration produces heat-upwards of 115 degrees-which kills the hornet. The prevents a solitary invader from producing a pheromone that alerts others to the hive.

The greatest risk is the potential threat to the honeybee population.  Experts are proactively working to prevent the hornets from getting a foothold in the U.S..  The current plan in regions where they are detected is to set traps to capture the queens, preventing colonization. Because they have low reproduction rates (only about a dozen eggs per season) and the colonies are relatively small at about 250, entomologists believe it is possible to contain and prevent their spread.

We are happy to report that here have been no confirmed Murder Hornets sightings in Arizona.  Experts doubt that they will be a threat to our Sonoran desert at all.  Some entomologists say “zero chance” for a number of reasons.  First, the climate here is not their usual preference of a temperate, sub-tropical or forested ecosystem. Even our wooded areas are at high altitude, which they may not tolerate.  Secondly, it is not known how they might measure up against our more aggressive Africanized honeybees, or if they would even find them desirable to feed on.  And then, there’s that 115-degree factor!

With 20 years experience with the Arizona bee population, we’d put on money on our Killer Bees!

12news: Will Murder Hornets be a Problem?