Wasps: The End of Summer Stingers 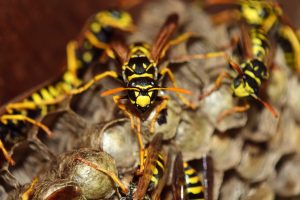 The onset of cooler fall temperatures will signal the honey bees’ final swarm season of the year, but the last surge of the summer heat welcomes wasps.  These long, warm days following the wet monsoon season provide the perfect breeding conditions for wasps in the desert.  Unlike the nectar-loving honeybee, wasps are omnivores and are attracted to both plants and other insects and larva.  Also, rather than giving their life for a single sting, wasps can attack repeatedly.  Yellow jackets, paper wasps, and mud daubers all are common in Arizona.

A large number of the pest control calls that ASAP Bee Removal receives this time of year are regarding wasps. They are frequently discovered gathering water from pools and fountains, or hovering around outside lighting. They often nest in door and window frames as well as roof eaves.  Though they nest in smaller numbers, they reproduce quickly and can easily hide themselves in bushes, thick foliage, and ground cover.  Where there is one nest, there are likely others.

When the conditions are right, multiple small nests may be located on a single property.  Because nests contain both male and female of the species, if the entire population is not eradicated, they can quickly repopulate.  It is also critical to do a thorough property inspection to be sure all nesting areas are found. Wasps are not only a frightening nuisance, but left untreated,  can become a serious infestation which can be dangerous to humans, pets and even horses and livestock.   If you find wasps in or around your home, call ASAP Bee Removal for a complete property inspection and effect wasp control.

Click here for more interesting facts on wasps and bees