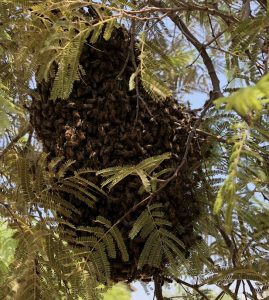 Fall swarm season is just around the corner.  Even though we still have a month left of summer, the bees are sensing a change in the seasons.  Shorter days and lower temperatures are signaling a move for bee colonies.  Since they last split in the spring, honeybees  have outgrown their nesting location and it is time to move again.  The colony will produce a new queen, and she will take about half the hive and find another place to set up house.

Often good monsoon activity will trigger these hive splits to occur, and we were called to this swarm in the Anthem area recently.  Gathered in a Mesquite tree, this healthy new swarm stopped to scope out a place to move in.  By removing and relocating these swarms in transition, we can prevent them from moving into homeowners’ structures. They are then released into desert areas, or transferred to a local beekeeper to be rehoused.

Bees that choose to nest in homes and other urban structures can cause damage to property, and are not easily saved and relocated. Homeowners who are proactive about calling for bee removal in the swarm stage help keep healthy colonies in the environment.  Even a swarm with a little attitude can often be re-queened and produce good domestic offspring.

We were recently asked what to do if you encounter a swarm on the move.  It can be a frightening experience in view of movies and news stories about bee attacks. In Arizona, these attacks often occur because an established hive was disturbed.  More than likely, swarms on the move are just getting from one place to another and they are not aggressive. Bees stuff themselves with honey before they swarm, which makes them especially docile. If you have a bee allergy, do be cautious, but there is no need to panic.  Take cover if you must, but odds are good that a swarm is not interested in you and you can be happy that our bee population is thriving and swarming to create another colony.